Stop pitting Selena Gomez and Bella Hadid against each other: It’s time to get real about sexism in pop culture

These are only 2 of the tweets I’ve seen in the past when the topic of feminism has appeared across the Twitterverse. And you, too, may have found yourself thinking “What on earth is all the fuss about?”

I couldn’t help but scratch my head at recent events in pop culture. To be honest, I sometimes make fun of myself for caring about pop culture–as it’s often seen as juvenile. But we are all influenced by pop culture to a certain extent. And while feeding my Twitter hobby, it’s hard not to notice what’s going on out there.

Selena Gomez made headlines yesterday for pictures that surfaced with her and Abel Tesfaye, known more commonly as The Weeknd, who has made quite a name for himself recently after dropping an album that soared to number 1 within a week of its’ release.

*PREMIUM EXCLUSIVE* Santa Monica, CA – Hot New Couple Selena Gomez and The Weeknd couldn’t keep their hands off each other as they emerged from Giorgio Baldi. The amorous pair were all smiles as they left the celebrity hotspot late at night following a long romantic dinner. Selena who has been linked to Orlando Bloom and dated Justin Bieber in the past, held on to her new man as they waited for their cars. The Weeknd (Abel Tesfaye) recently split from supermodel girlfriend Bella Hadid who he dated for 2 years. Selena couldn’t stop smiling and kept her arms tightly wrapped around her beau and the couple stopped to kiss often as they made their way out of the restaurant and headed to their car. AKM-GSI January 10, 2017 To License These Photos, Please Contact: Maria Buda (917) 242-1505 mbuda@akmgsi.com sales@akmgsi.com or Mark Satter (317) 691-9592 msatter@akmgsi.com sales@akmgsi.com http://www.akmgsi.com 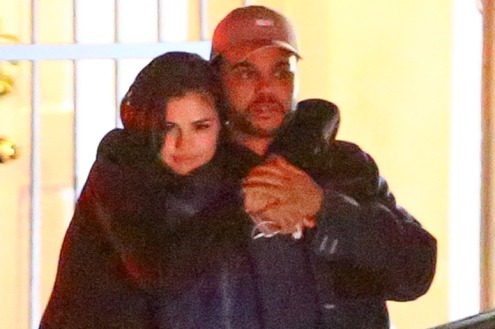 These photos caused quite the stir, not only because it involved two internationally known celebrities, but because Mr. Tesfaye recently parted ways with his longtime girlfriend and model, Bella Hadid.

The buzz over celebrities and their life decisions is nothing new, but what I find so completely baffling are all the dramatic attacks thrown about on both of the women in this scenario.

Hundreds of people from all over spent hours discussing the photos, what they mean, and most harmful–which of the women was more deserving of The Weeknd’s attention and love.

Careers were compared, success was measured, appearance was scrutinized, assumptions were made. All this from complete strangers on the Internet who have never met either of these women in person.

In fact, even substantially popular Twitter accounts got in with the crowd and started asking users to pick between the two–Who do you prefer, Selena Gomez or Bella Hadid? Was the decision a downgrade?

Celebrities have been criticized since the dawn of time. Who cares? No, this goes way deeper than our simple fascination and obsession with the lives of celebrities. What is more of an issue here is the absence of something, and that’s criticism for Abel Tesfaye.

Not a single tweet in all the Twitterverse (that I laid my eyes on) even REMOTELY criticized the Weeknd. This despite the fact it was him who seemingly began a new relationship two short months after his split from Hadid. Does he deserve to be judged for making these choices by strangers? Not necessarily. And we didn’t see that.

What I did see was the absolute demonization of the women in the situation–some of the tamer comments being about who’s had the more troubling past, the more harsh throwing words around like ugly, attention-seeking, and other disrespectful names and accusations.

Let’s take a look at a similar situation. Taylor Swift was nothing short of attacked and dragged to hell and back for beginning a relationship with Tom Hiddleston after her split with Calvin Harris. Everyone looked to her as the problem. So why, when the roles are reversed and it’s a man moving on, does no one question his credibility?

The majority of people tweeting and arguing over whether Bella Hadid or Selena Gomez is the more acceptable human being are in fact, girls. Girls who sadly aren’t realizing that they are only furthering the media’s habit of pitting women against each other for the pure entertainment of the public. Will they one day be left to feel inferior, if a boyfriend leaves them for someone else? It’s not how I would want my sister, friend, or daughter (if I had one) to be perceived.

Of course I hold men responsible to standup against the ridiculous immaturity that goes along with these idiotic comparisons, but ultimately, it’s up to us women to stop perpetuating this crap. Stop comparing the quality of human lives on the basis of appearance or circumstances you have no idea about. Stop letting people get away with it. Call people out who make unfair comparisons. Hell, I even saw one tweet that criticized Bella Hadid for supposed drug use at age 17. The Weeknd has plenty of songs that mention the use of illegal substances, but still the person thought it necessary to point out her past.  This ideology is toxic and most people are egging it on while completely oblivious to its potential harm.

If you’re going to point fingers at Bella or Selena, at least be consistent and point them at Abel, too. This is how we end double standards and take one more step towards equality.