Hello again, readers. Wow, what a great day. I have so much to cover. I’ll keep the intro short and get right to it.

The day started out at Starbucks. We figured we would grab something quick for breakfast so we could get started seeing everything we wanted to. I ordered none other than a Maple Machiato. Because, maple. 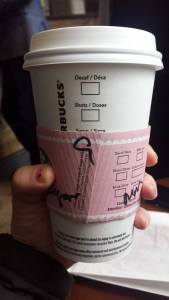 After that, we headed downtown into the Financial District. We were headed to the Eaton Center…Toronto’s famous shopping mall. The Canadian/American dollar exchange rate worked out in our favor and we took advantage of some nice sales. At Club Monaco, we ran into a lovely sales person by the name of Brandy who helped us out, not only with our purchases but with some tips on what to check out in Toronto.

After shopping, we grabbed food and went back to our hotel. We took an hour nap to regenerate and then headed back out. We ventured East of our hotel to take a glance at Lake Ontario, which is still partially frozen over.

Next we went to the CN tower. You can do a variety of things there, from looking out the observatory at the city, to having drinks at 360, to hanging off the side of the tower while connected to wires.

We wanted some drinks before heading to the Krowdpop concert. When we discovered that we would have to pay the full price to get up into the tower on top of having drinks, we opted to do something more local. We took our friend Brandy’s suggestion from earlier and cabbed it to The Drake Hotel. Let me tell you that this place has some of the best cocktails I have ever tasted. My favorite: Basil Smash–Gin, Lemon Juice, and Basil. So simple, so delicious.

We also Lobster nachos that were equally as awesome.

After we finished raving about how much we loved the Drake (and promising ourselves we’d go back tomorrow), it was time to head to Massey Hall for the concert. As I type this in our hotel room, it’s nearing 1 AM Toronto time. With all my pictures, typing is becoming slow and difficult. I’m so excited to write about the concert, but I think I will have to save that for it’s own blog post. Spoiler: It was AWESOME.

Until tomorrow, goodnight Toronto & wherever you may be reading from!